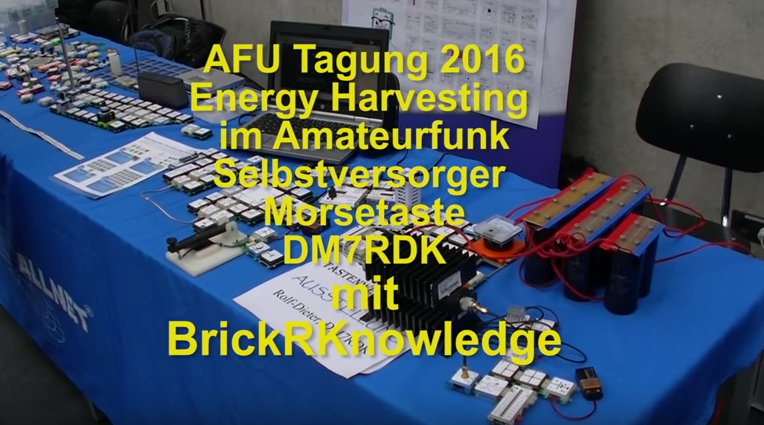 This year’s ham radio conference took place on 12th and 13th of March in at the University of Munich (http://www.darc.de/distrikte/c/amateurfunktagung-muenchen). In this context, there was a competition dealing with the target of building a morse key and transmitter that receive their power only due to the morse motion. Participants were allowed to initially give ten v’s before actually sending. It was obligatory to have a monitoring tool, participants were allowed to use hand- and foot switches. In advance, participants had to hand in a documentation of their construction and they had to present the development and the Do-it-yourself construction during the competition. The presentation’s quality, the documentation, wealth of ideas and technical realization were all part of the evaluation.

Iris Freitag DG5MLH developed a key that resembled most of all a usual morse key. For creating energy, she used the mechanics and the generator of a Dynamo flashlight and fischertechnik (construction toys) and corks and spoons. As Iris told us in her presentation, she was “in the wrong place at the right time”, that is, at the OV Munich North’ tech meeting at Mohr-Villa. She is a nonprofessional when it comes to electronic engineering but she was inspired at Mohr-Villa which is also where she received the necessary support for her keys: Rolf-Dieter supported her with the Brick’R’knowledge bricks for her transmitter. When winning the price she was so excited, she did not really know what was happening.

Willi Pfadler DK4MY developed the biggest manual switch. He divided a bicycle in half and with the help of the bicycle chain and free running used the pedal powered drive. He wrapped the rim with wire in order to increase the oscillating weight and he connected a generator to the bicycle. Using the bike’s pedal required some strength; however, with 10W up to 80m he managed the highest RF power performance among all participants. 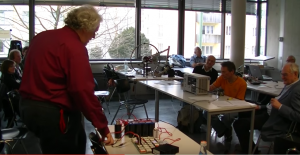 Rolf-Dieter Klein DM7RDK was the only one in the 2m band who presented a foot switch. For this, he used a special generator that is used for charging batteries with a foot pedal. It includes similar mechanics as Iris Freitag’s flashlight but it is more extensive and it charges an electrolytic capacitor bank of 1farad up to about 15V. Unnecessary to say that Rolf-Dieter built his electronics with bricks from Brick’R’knowledge out of which a converter (input 2.6V-25V) delivers an output voltage of 8.8V with a maximum of 2.5A.  The SiLabs RF power generator delivers 144.19MHz out of which follows an amplifier HMC311 + Motorola PA 10watt as well as a sidetone via loudspeaker and LM 386 and charge control via voltmeter and bar display.

As the operator needs some physical strength to use the pedal and to be able to normally morse, Rolf-Dieter reduced the transmitter’s performance down to 3.6watts. Yet, the audience recognized that having a hobby like Willi’s and Rolf-Dieter’s high-performance keys will finally lead to active “radio sports”. 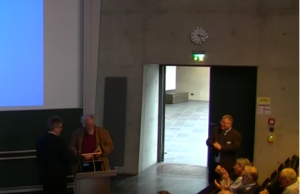 It is remarkable that many participants used the Brick’R‘knowledge system (www.brickrknowledge.de). Yet, it is not that much surprising as the system is perfectly suitable especially for quick setups and experiments.